In 2012, while working as the Program Manager for the Ohio AIDS Coalition I had the privilege of traveling to our Nation’s Capital during the International AIDS Conference. While there, I worked as a volunteer for the NAMES Project AIDS Memorial Quilt. Below are the blog entries I wrote while in D.C. that year – I simply felt inspired to share.

The AIDS Memorial Quilt is the largest living memorial of any kind in the entire world. The visual impact is something that you could absolutely never prepare yourself for. Each panel is required to have the dimensions of 3ft by 6ft, which is representative of a grave site, and with that in mind viewing the panels/blocks takes on a whole new submersive  experience.

Due to the fact that these blog entrees were recorded at the conclusion of each day, my narrative is quite raw.

To say the AIDS Memorial Quilt volunteer staff had to improvise today would be a tremendous understatement. Battling the constant wind and rain made for a very interesting, soaking-wet day. As some of you may be aware, when the panels are on display it is of the up-most importance that they be in a safe, non-damaging environment. That being said you can imagine the urgency that kicked in as the blocks were being lifted off the ground and placed in dry storage. Luckily, a large portion of the displays are inside this week, so visitors to D.C. are still able to view panels uninterrupted regardless of the weather.

My area assignment kept me on the National Mall along with several other NAMES Project employees and volunteers, including Roddy Williams, the NAMES Project Director of Operations. It was simply amazing watching them lead the group in a direction that allowed us to make the best out of the day. Visitors coming to the mall in hopes of viewing their loved ones panel/block didn’t have to walk away without having that wish fulfilled.  Roddy and his team were able to locate the blocks in dry storage that were requested on site and were viewed under a dry tent –providing a very emotionally intimate experience.

Despite the inclement weather of the day, a Reading of the Names was still able to happen. For a few hours, volunteers were able to read names from the official NAMES Project list. I was fortunate enough to have the opportunity to join in on the readings and had the privilege of reading two names in particular J. Kevin Sullivan & Michael McDonald. They have slipped away from this world but never will they be forgotten – And it is events, such as this conference, that keep their fight and memory alive.

With a little luck on our side the rain will hold off tomorrow and the ground will be dry enough for the blocks to be laid out!!

The Inspiration behind the Quilt

In 1985, the initial idea for The AIDS Memorial Quilt came to Cleve Jones, one of the organizers of the annual candlelight march in memory of San Francisco Supervisor Harvey Milk and Mayor George Moscone, both assassinated in 1978. To honor also the more than one thousand San Franciscans lost to AIDS, Jones asked fellow marchers to inscribe the names of their departed friends and loved ones on the place cards they carried. For the first time, numbers became names. At the end of the march, Jones and other participants taped the placecards to the walls of the San Francisco Federal Building. It was this action-the creation of a wall of names and is graphic resemblance to a patchwork quilt-that inspired The AIDS Memorial Quilt and eventually led to the creation of The NAMES Project Foundation.

Quilt Fact: The NAMES Project Foundation was founded in San Francisco in 1987

The early morning grey skies coupled with a heavy haze left the AIDS Memorial Quilt volunteer staff feeling a bit shaky – Are we going to be able to display today?  As the official opening of the quilt began, there was a buzz about the crowd – the memories of our lost love ones were all around us. It became clear midway through the opening that the weather was in fact going to cooperate, and so we began the process of laying down the blocks. Little by little the blocks were laid down and slowly, the Mall began to fill up.

Laying down stitched together pieces of fabric, sounds simple right? Well not so much.  The truth is it takes a small army working together to complete the task at hand. The coordinated efforts of the NAMES Project staff is simply amazing, all together pieces of the quilt are being displayed in over 50 locations here in D.C. The fact that just about anywhere you go during the IAC, you see an extremely moving block. It’s the constant reminder that the panels provide – we have lost so many and enough is enough!

After I completed my shift with the quilt I made my way over to the Washington monument to take part in the AIDS 2012 events, including the human red ribbon and the march on Washington. The kick off for the march brought so many of us together – I was able to find 20+ Ohio advocates to share the experience with.  The Rev. Al Sharpton, journalist Tavis Smiley, Dr. Cornel West and former Atlanta Mayor Andrew Young were among those who urged President Obama and other elected officials to do more to combat the domestic epidemic.

We took to the streets and began the march on Washington – traveling right down Pennsylvania Ave. The atmosphere was surreal.  I believe I pinched myself a few times to ensure I wasn’t dreaming. The fact that the International AIDS Conference had returned to the United States after a 22 year hiatus and that I am a part of it is still hard to wrap my mind around.  Advocating for so many who are unable, and for those we have lost, is an overwhelming feeling that will energize me for years to come. 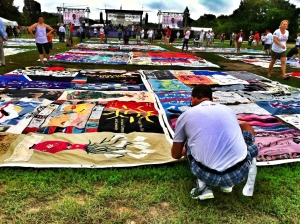 As the Quilt unfolds…. Time and time again…

As an observer of the quilt you are quite possibly completely unaware of the tremendous collaborative effort it took for your experience to take place.  The NAMES Project operates with a small staff and relies heavily on the assistance of volunteers – especially at an event as large as the International AIDS Conference.  Arriving on the National Mall today that reality became completely evident – this being the first ‘weekday’ the quilt was on display in D.C. our volunteer assistance dropped by at least half.  Operating with a staff of only about twenty or so folks we had our work cut out for us to say the least. Despite the drop in assistance the team was able to get three fourths of the mall covered, the other quarter is currently under construction.

The bonds that seem to form between volunteers and staff alike were unspoken, but so very powerful.  Many times no one was speaking at all – we just pressed on in order to finish the task at hand.  We are all here for the same reason and it’s that passion that allows you to push through the tears and sweltering heat of the day.

Today at the first sign of rain we all sprang into action – protecting the quilt panels is of the upmost importance and our actions made that very evident to any onlookers. Following the NAMES Project procedures the mall was cleared in no time. First the panels were folded and carried to the side of the mall, closer to the dry storage and covered with plastic until The Quilt carts came to collect them.  Throughout the process the team effort withstood the test: folding, carrying, covering, loading and finally placing in dry storage – ensuring the panels would live to be viewed another day.

I feel very fortunate to have met several individuals who have been involved with the Quilt since 1988. The fact that so many people, young and old share the passion to carry this memorial on passing the torch from one generation to the next is unlike anything I have ever experienced.  There is an energy surrounding the Quilt and its followers that is unexplainable. You might be thinking, how could laying quilts on the ground and folding them back up at the end of the day be such an experience? – To that I say Its way more than that, it’s a direct tangible connection to so many we have lost to HIV/AIDS.

I encourage you to educate yourself on this, the largest living memorial of any kind in the entire world.Until the last panel is attached we will continue to move forward. www.aidsquilt.org

A Stitch In Time…

Since the Quilt’s inception, volunteers have been critical to its ongoing growth and care. More than nine thousand volunteers across the United States helped the traveling crew display The Quilt on its first national tour. At the 1996 display in Washington D.C., more than eight thousand volunteers were on hand to cover the National Mall with The Quilt between the Washington Monument and the U.S. Capitol. Even here, at the International AIDS Conference, volunteers help lay out The Quilt every morning and fold it up for safekeeping every night.

Quilt Fact: There are currently twenty-one NAMES Project chapters in the United States and more than forty international affiliates around the world, all run by volunteers.

(Above is the panel I created for my dear friend, mentor, and boss the late J. Kevin Sullivan. His panel is now part of block #5884 in the NAMES Project AIDS Memorial Quilt Archive.)

I hope you found this post informational and informative. Fight on Friends.